← To win in mobile: It’s a situation, not a news channel
Native advertising — what is it, and why now →

How Morris is reversing the biggest disruption: Loss of advertising accounts

About five years ago, on a weekend, Derek May — then publisher of the St. Augustine (FL) Record — was doing what many publishers were doing at the time: Trying to figure out the steep decline in advertising revenue he was seeing in his unit’s financials.

Thanks to his background in accounting systems, he was able to plunge into the Morris Publishing Group’s business data warehouse to sort it out. After a while, he realized none of the standard reports answered a key question: How many businesses were advertising in the most recent period compared to the previous period? So he pulled out the data and built a spreadsheet.

Then it hit him between the eyes: The total number of advertisers was down steeply. And as he compared periods farther and farther back, he found it had been going down for a long time. The loss of accounts was a big deal.

Wondering if this was just a fluke in St. Augustine — hit especially hard by the recession, like all of Florida — he dug into other Morris markets in Georgia, Texas and elsewhere. He found the same pattern in every market.

He was on to something big.

So big that I think it’s accurate to call it the biggest single disruption hitting newspaper companies. Market by market – in the United States, at least – the list of active advertising customers been shrinking for many years. The recession didn’t cause the decline; it only accelerated it. Advertisers have been quietly opting out of pricey newspaper solutions for a long time, substituting other ways of reaching potential customers. Digital alternatives have given them many more choices in recent years.

The bottom line: Our industry’s customer base is shrinking, and we have to figure out how to reverse it.

Five years later, Derek is head of the newspaper company (Morris Publishing Group). And he’s made reversing the loss of accounts a top priority across the company for more than a year. There’s much still to do, but thanks to his passionate commitment, we’re showing encouraging signs of improvement.

I blogged about this initiative last year, here and here, as we developed our plans to mobilize for account growth. Now we have some good results to share, and some learning about what seems to be working. The chart below shows our progress: 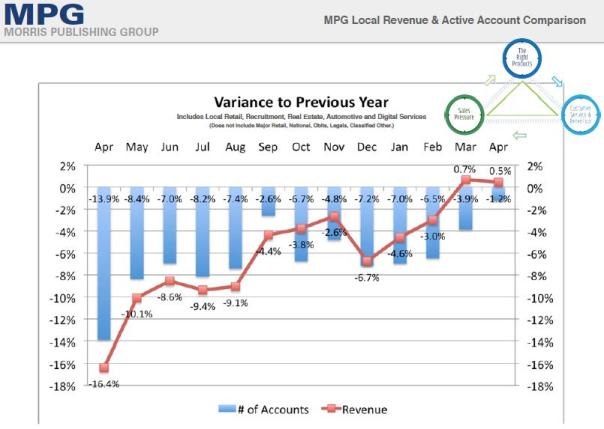 The chart shows, in blue, the trend of steady reductions in the loss of accounts across the 11 Morris daily newspaper business units. Several of our business units have actually gone positive. The red line shows — not surprisingly — that the trend in revenue runs in close parallel, and that it went positive for March and April.

It’s hard to say exactly how much of this improvement is due to the economy and how much is due to our internal focus on growing the customer base. But we believe the steps we’ve taken, and continue to take, are a major cause of the trend.

Reversing the decline in active accounts requires two things: Retaining more existing accounts and winning more new accounts. We’re advancing on both goals with many specific initiatives — more than I can recount here. But they fall into three major categories:

Possibly our most powerful change so far has been in the metrics. We set about separating the revenue and accounts we couldn’t control from those we could control. Here’s how it looks right now: 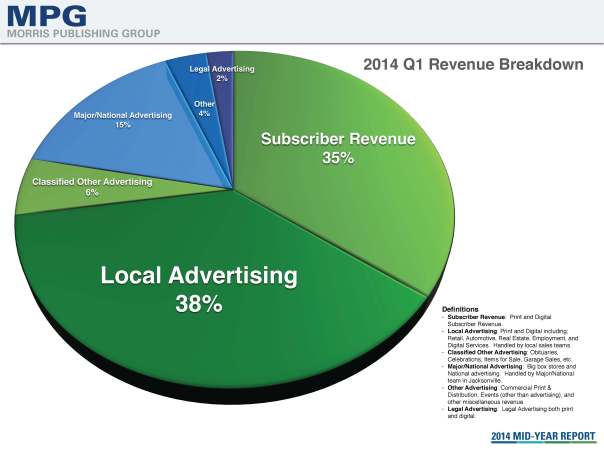 The good news is that local advertising — consisting of the businesses with whom we have direct relationships and some amount of influence — is the largest revenue category. And it contains many thousands of current non-customers. Our local staffs can actually sell to these businesses.

To reveal the trends in that category on a daily and monthly basis, Morris has developed a series of regular reports placing active accounts under a microscope.

A necessary first step was our adoption in 2012 of Sugar CRM, a powerful customer relationship management system. That gave us the ability to track sales activity. Then we began to track — every day — the number of new or lapsed accounts we closed.

Meanwhile, another important step was improving the suite of products we were taking to the market. We needed to be selling what businesses wanted to buy. We made major strides in 2012 and 2013, adding a wide range of effective digital solutions to our arsenal, and it’s a continuing process. This gives us more and better offerings to take to non-advertisers.

This report goes to all sales managers and sales reps every day, so they can see how their business unit is doing compared to all others. (AVO means “average value of order.”)

Mark Lane, our corporate vice president of sales, is the primary driver of the account-growth initiative. He says the metrics may be the most wildly important part of it. “Once people could see the numbers, it started a lot of conversation,” he said. “People started looking at what was happening category by category and trying figure out what they could do about it.”

Here’s the rollup report; we also produce breakouts for print + digital sales, and digital only.

A third report is more forward-looking, to help the business units focus on account retention. On the 7th of each month, that report goes to publishers and vice presidents of sales, listing all accounts that have sales on the books for the current month vs. all the accounts that ran the previous month. This helps the sales teams do their best to reach and serve the accounts that haven’t posted any business yet.

2. Focus where we can make a difference

Quite intentionally, the reports above don’t include major national and regional accounts. Historically, these have provided a huge amount of newspaper revenue, and they have always absorbed a lot of time and attention of newspaper sales staffs.

But these accounts are largely beyond a local newspaper unit’s control, because unilateral decisions are made at the advertisers’ corporate headquarters. Spending in this category has been shrinking steadily across the entire newspaper industry, and the trend is sure to continue. In the first quarter of 2014, at Morris, these accounts constituted only 15% of our revenue (see first chart).

In 2012, we committed to lifting responsibility for these accounts off our local sales staffs by creating a corporate team to handle them. Advertisers had been requesting this for years, and it consolidated what selling and negotiating power we have into one place.

We also created a central telesales and lead-generation team, making calls into our markets on prospects identified from various commercial data sources. And we’ve developed central teams to deploy and optimize the digital sales made by our sales teams, lifting those duties off the business units.

The account-growth reports above also exclude revenue from obituaries and legals, which are beyond the control of the sales staffs.

These steps are freeing our local sales management and reps to focus on improving the results shown in the reports above.

3. Organize for retention and growth

Our biggest change is still in progress. Our publishers, VP’s of sales and corporate team had agreed in a July, 2013, sales summit that our traditional sales structure was a big part of the reason for our declining account base.

A key indicator was that we typically were serving less than 10% of the potential advertisers in our markets, while managing to make calls on only a small number of the non-customers every year.

Like most newspaper companies, we were expecting sales reps to provide excellent service to their existing accounts while also making lots of calls on new accounts. The latter wasn’t happening because — like most newspaper companies — we had essentially sized our sales staffs to handle the business we had. It’s a simple truth: If you’re not calling on the prospects, you can’t make the sales.

In fact, the traditional structure is not well suited to either part of the account-growth challenge: retaining existing accounts through excellent service, and winning new accounts through fast-paced sales.

Meanwhile, in our digital-only startup company, Main Street Digital, we had created a completely different structure. There, the sales team was 100% focused on selling. When they closed a sale, the account passed immediately to a separate team of customer service managers to fulfill the order and maintain close ongoing contact. With that structure, we are seeing retention rates around 98 percent — far higher than in our core sales operations.

So we resolved to move toward that structure in our core sales teams as well. It’s a model that seems to be well-suited for our mid-sized metro markets (Augusta, Savannah, Amarillo, Lubbock and Topeka). For our larger metro in Jacksonville, and for our smaller community papers, it has to be scaled up or down appropriately. Right now, some of our markets are farther along in transition than others, creating “hunter” sales positions and “farmer” account-retention positions.

Recently Mark Lane asked the business units who are doing best at reversing the loss of accounts to describe what’s working.

In Topeka, VP of Sales Bob Barth said it was a focus on both sides of the challenge — retention and new sales. They’re paying close attention to all advertising running in the market, both print and digital, and calling on all the advertisers they see in other media. At the same time, their two new-business reps are doing extensive prospecting in nearby communities and landing new accounts.

In St. Augustine, Director of Sales David Robbins cited a new monthly newsletter to active and lapsed advertisers that has resulted in several upsells and reactivations, an increase in management time spent cold-calling with reps, a new program focused on their weekly entertainment section, and getting up to full strength on the sales force, including training.

In Jacksonville, VP of Sales Lana Champion offered a long list, including:

Reversing the long-term loss of the customer base is a big deal, and it’s a lot of work. However, the alternative is continuing to shrink toward oblivion, and that’s simply unacceptable.

← To win in mobile: It’s a situation, not a news channel
Native advertising — what is it, and why now →